Well, we did it! We chose a venue and set a date. We aren't getting married until June of 2015, so we have some time still, but I feel good knowing the "where" and the "when". Finding a venue was harder than I thought it would be! We looked at a TON of different locations within a two hour radius of where we live. We almost immediately ruled out locations in Wine Country, our home; everything is so expensive! So, we actually started our search in San Francisco, before taking a quick look throughout Sonoma County. I'll document that leg of the search in this post, and tell you some about other venues we scouted in the rest of the Bay Area in a later post. Overall, the venue hunt was a lot of fun, but it was also much more difficult than we thought it would be. It was really difficult to find a place that worked with our budget, our theme, that would be workable for our out of town guests, and most importantly: that we both liked. There were a couple of venues that John really liked that I was lukewarm on, and vice versa.

The day we got engaged, we actually went to look at a venue that was PERFECT. It was the San Francisco City Club, which used to be the social rooms for the Pacific Stock Exchange.

It was designed in a lavish Art Deco style, and very quickly became, quite literally, the Platonic ideal of all venues in our mind. It wouldn't take much decorating, would feel like our guests had stepped back in time, and was exactly what we had wanted without even knowing it existed. However, it turned out that it wouldn't work for our budget. Because it was the first place we looked, we weren't prepared to factor in service fees, tax, and alcohol into base prices, and it sounded like on a week day it would have been reasonably priced for us! Once we started adding everything up though, we realized that even if we could make it work on our budget, after food and venue fees we would have very little left over, and would probably end up going over budget, something we absolutely do not want to do.


Add to that the fact that we would have had to cut the guest list nearly in half, and we decided it wasn't worth it. We don't want to go into debt for the wedding, and we didn't want to feel guilty and stressed about the whole thing. It was a lovely dream and it has been difficult for me to put it aside completely, even though I know it would have caused us a lot of stress and upset had we decided to "splurge" on it. It also would have been more expensive and difficult for our family, who will be traveling from out of state and are not used to navigating big cities. However, most couples have to compromise on many aspects of their wedding, and I do not regret our choice.

We looked at a lot of options within Sonoma County as well, trying to see if we had missed something. We moved away from looking at wineries, which weren't really our style, and started focusing on trying to find hotels or event centers that had a classic look that would lend themselves to the Art Deco theme. Most of the places we saw were very "California/ Mission/ Modern", in true Wine Country fashion. Nine brides out of ten at work tell me they are doing a rustic-vintage-country theme, and I am beginning to see why. Other than wineries, our venue choices were barns, fields, gardens, and a handful of hotels.

We did seriously consider a couple of spaces up here, including the local Hyatt. The Hyatt would have been really convenient for guests, and they had an absolutely beautiful venue space with a huge outdoor fireplace.
However, we didn't like the room that they would have put us in. It was cramped, and we didn't have enough guests to get bumped into the larger room (which would have swallowed our group). Plus, the colors in the conference rooms were overwhelming; everything was sage green with burnt orange accents. The coordinator showed us photos of previous weddings saying "and here's one with a white and purple theme, this couple used blush and taupe, this couple did yellow and purple..." and all I could see was green and orange, green and orange. Not what we wanted. If we hadn't wanted to decorate much and had loved green and orange, it would have been a great fit; the light fixtures, carpeting, etc... all had a lot of personality, they just weren't the style we were going for.
The outdoor reception option was lovely, but once again, not exactly our style; John and I don't even like patio seating at restaurants, so 6 hours outside (and in June, where temperatures at night can easily dip down into the 50's) did not appeal to us. 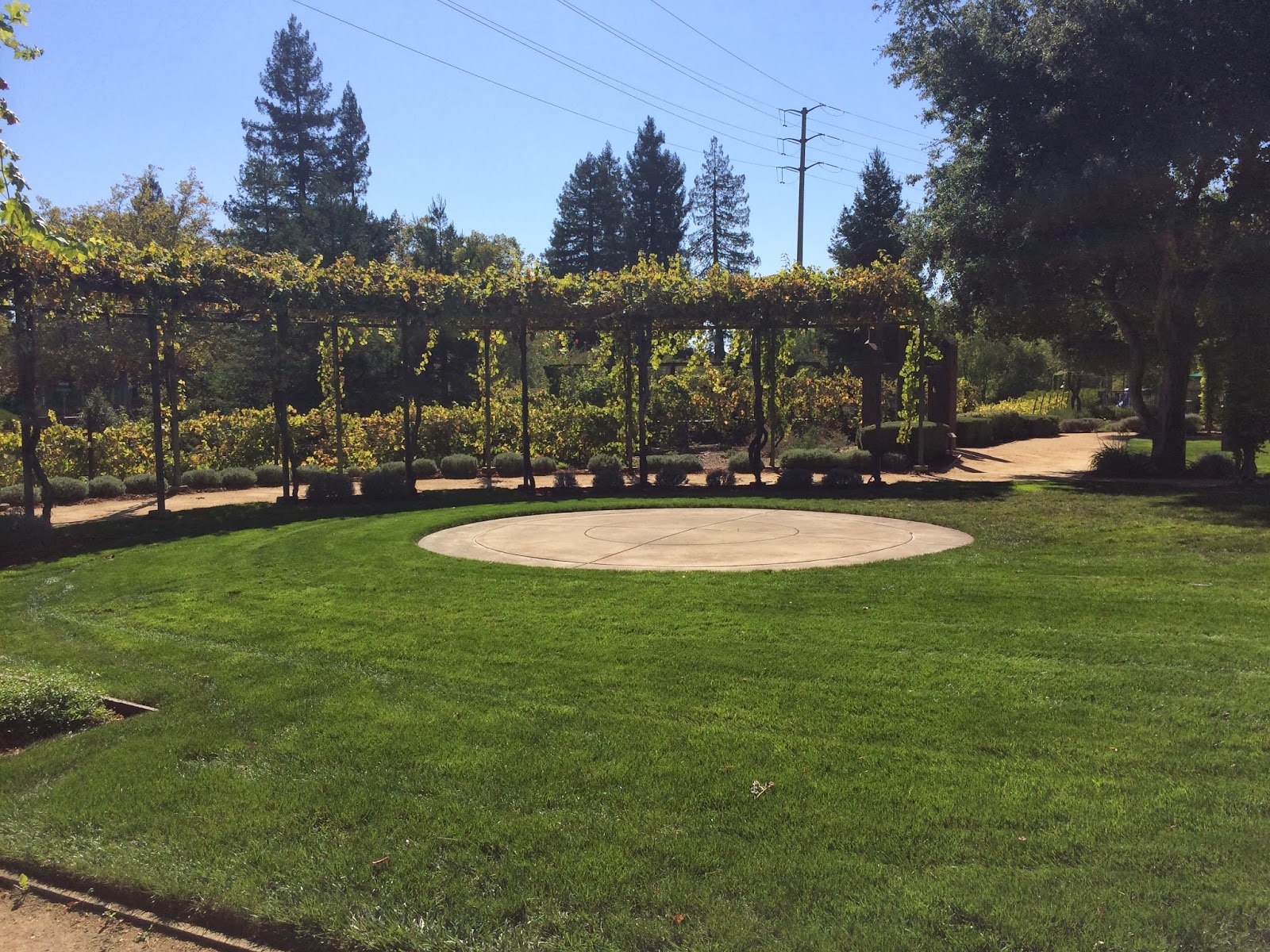 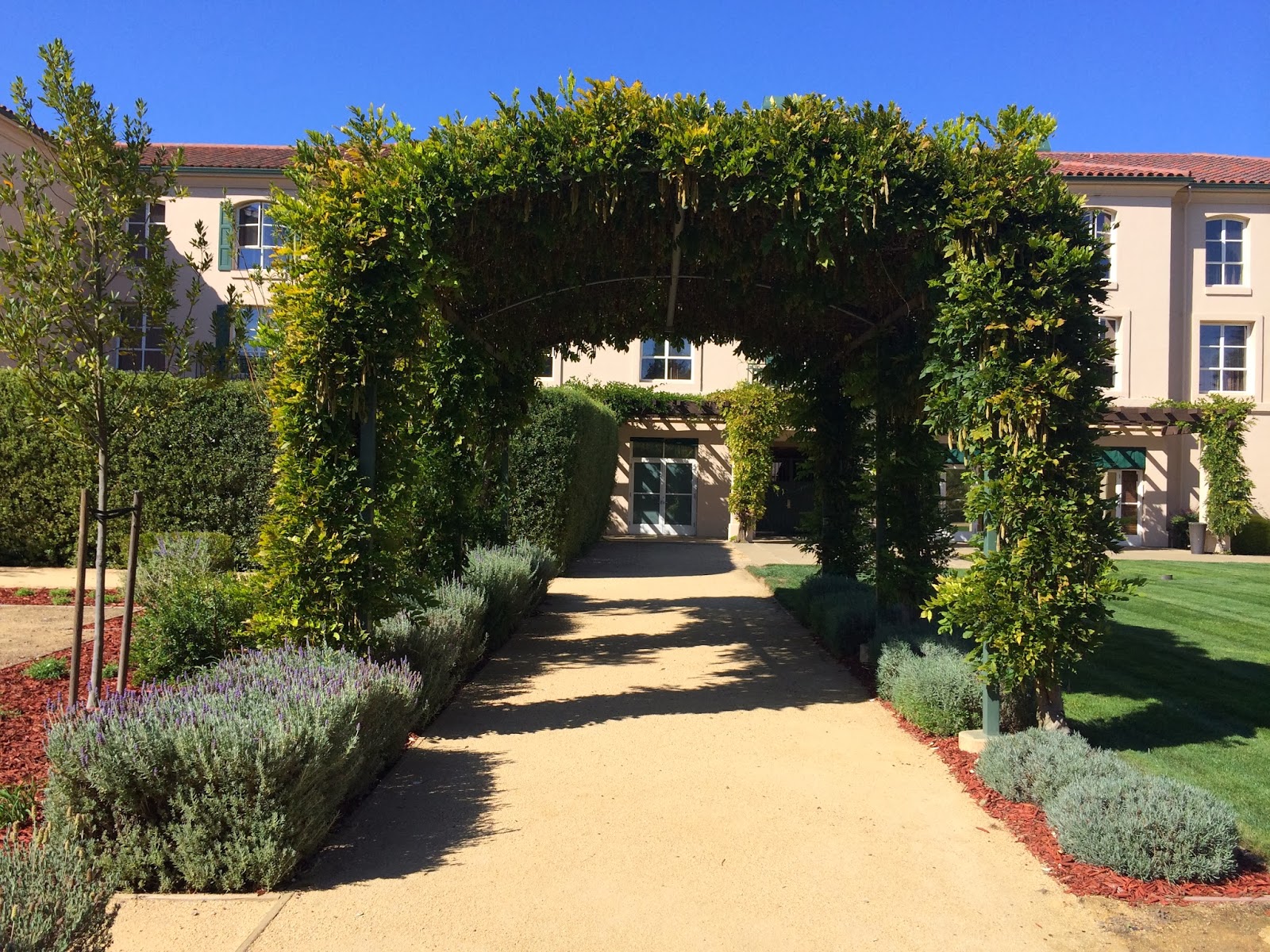 Madrona Manor was another venue we took a peek at that was beautiful, but not our style. It is a lovely old Victorian house painted yellow surrounded by gardens. It would have suited itself to a garden theme really well, but John and I didn't see any opportunity to bring any glamour into the mix. Unfortunately we didn't take any pictures of this venue... But if you're considering a Wine Country wedding, it was beautiful and worth looking at! It just wasn't a good fit for us.

The Sonoma Fairmont was my favorite venue that we looked at our way, although it was even more expensive than San Francisco City Club. It was an old California Mission Revival style hotel with a large social lobby, impeccable grounds, and little villas of clustered guestrooms, something you could imagine existing in 1930's Old Hollywood, but it still wasn't the style we ideally wanted. They had a meeting room in the main hotel buiding as well as a tent on the grounds that they use for wedding receptions.
It would have been a pain for out of town guests as well; there is no major airport conveniently located to us, and the Fairmont itself is a fairly pricey hotel- we had to pay $20 to park there just to walk the grounds- but it was a really beautiful setting. We didn't seriously entertain it as a venue since if we were going to spend that kind of money on a wedding, it would have been at the City Club, but it has gotten me daydreaming about a romantic weekend excursion...

Well, there are the highlights from the first few venues we looked at... There were a few other stops around Sonoma County, but these were the most noteworthy! Next up, I'll be posting about our adventures in the South Bay, East Bay, and Sacramento, before telling you where we finally booked. Until then!