Ready to look at more venues? No? That's what John said at this point, too... But I was really anxious to see some more of our options! I grew up in Fremont and went to high school in San Jose, so I was really comfortable with the idea of getting married in a different part of the Bay Area from our home, and I'd found some really promising venues during online searches out in the East Bay. John and I planned a day and off we went.

This was after our successful South Bay hunt, and by now we were feeling like the SF City Club probably wouldn't be our venue, but we were hoping to find somewhere that would have its own charm and be within our budget, while still being convenient for our out of town guests. The East Bay wouldn't have been as easy as the South Bay; airports are a little further away, and there are parts of the East Bay that are a little rough around the edges, especially from out of towners hailing from smaller midwestern towns, but there were some great historical buildings to visit. Our first stop of the day was a different City Club... The Berkeley City Club! Built by Hearst Castle architect Julia Morgan, it really and truly did feel like a mini Hearst Castle, between the architecture and decor. Ultimately, it was a little too ornamental for John's taste, although I thought it had a lovely period flare (if not Art Deco-specific). If it had been just me making the decision, I would have explored this option more, but it didn't resonate with John and his preference for simple, clean lines.

Price-wise, the Berkeley City Club was less than SF City Club, but still a little higher than where we were comfortable ending up. I loved the history, and it would have been almost like getting married in a museum, but we wouldn't have had much of an opportunity to infuse our personality into the space. John was concerned that the venue wasn't as well-versed in hosting a wedding as some of our other options. The rental would have included much of the upstairs area, but as we weren't able to schedule an official tour, I never did get it straight which areas were up for grabs. One ceremony space option was an upstairs terrace (which, as John pointed out, had a lovely view of the free clinic dispensing clean needles across the way).

Here are another two rooms that I believe may have been indoor ceremony options (although I was unclear on whether or not these were included in the rental). 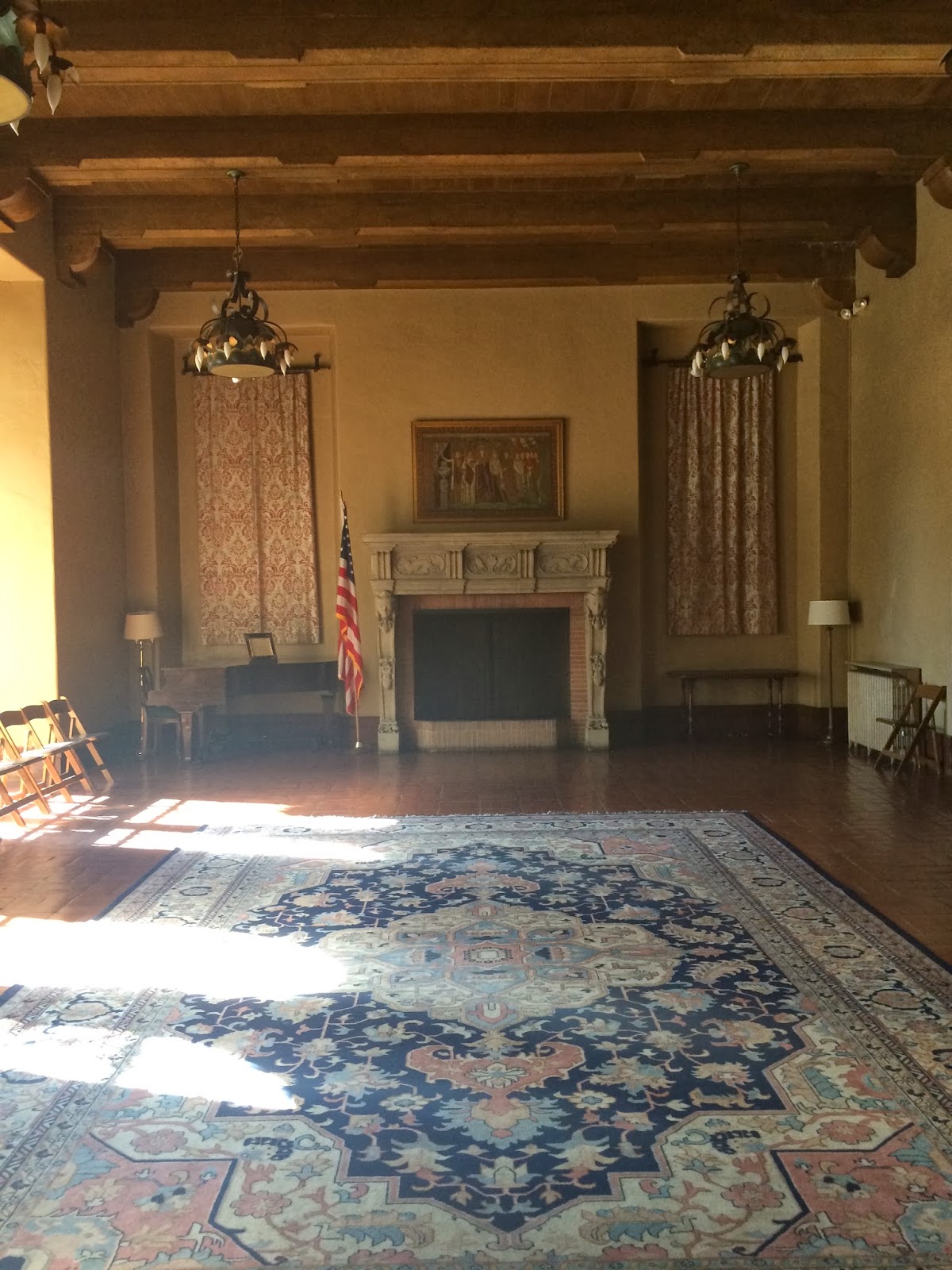 And this is what would have been the likeliest reception space. 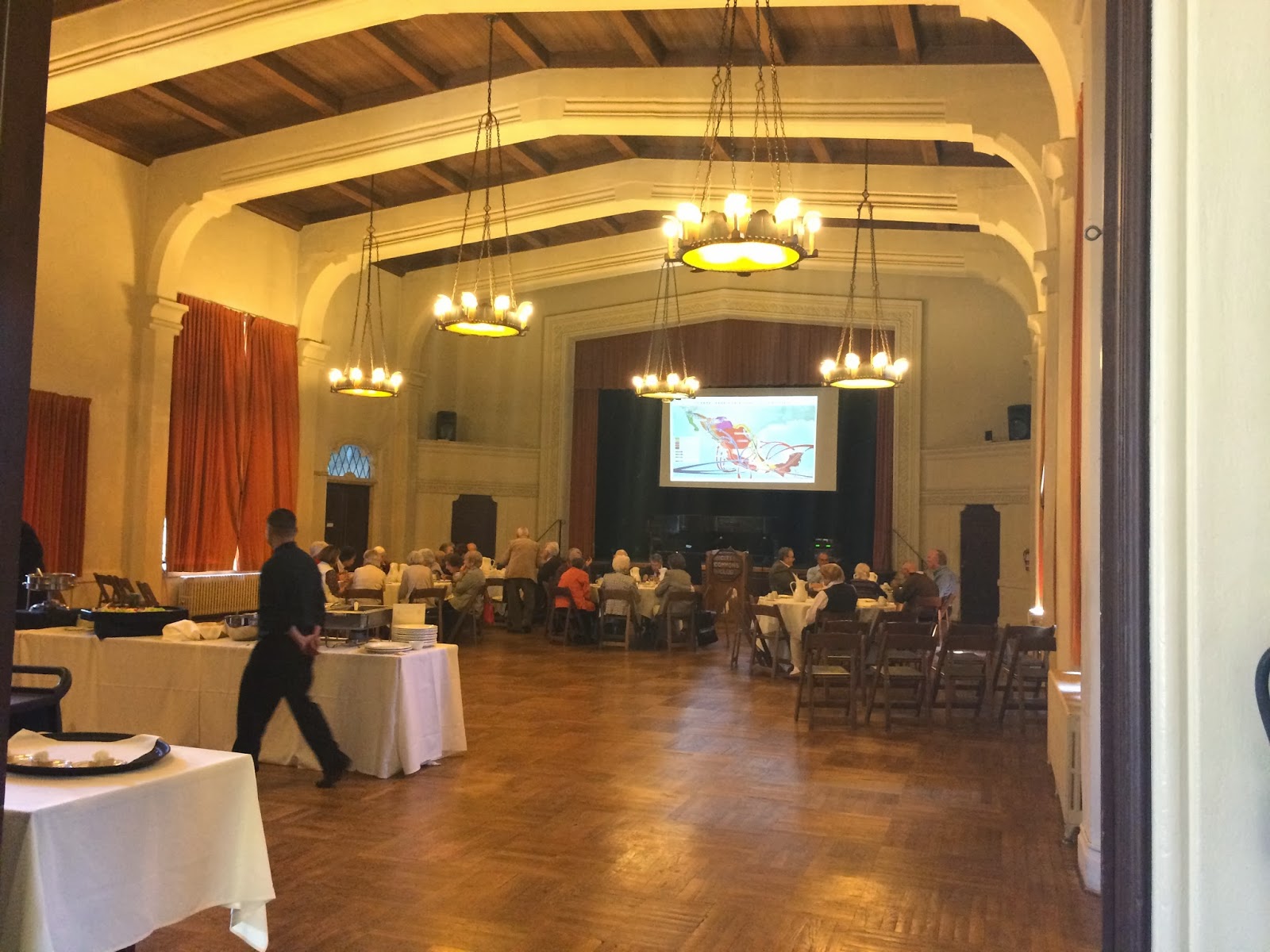 There was no nearby lodging for out of town guests, so we would have had to have figured out the parking issue at some point or another. It wouldn't have been impossible, but it's likely we would have had to ask guests to pay for parking-- not ideal! It was such a neat place to look through, though. Just for kicks, I've included a couple of other pictures of the Berkeley City Club. These are areas not included in the rental! It really is a hidden gem, if you live in the area I think it is worth seeing if you can explore, whether or not you're considering it for an event.
Our next stop of the day was the Sequoyah Country Club in the hills overlooking Oakland. It was a really pretty building that is just about 100 years old. The set up was a little bit funky; there was long open space that had columns separating the main hallway of the building from the reception area, and then a separate room across the hall would have been the dance floor. 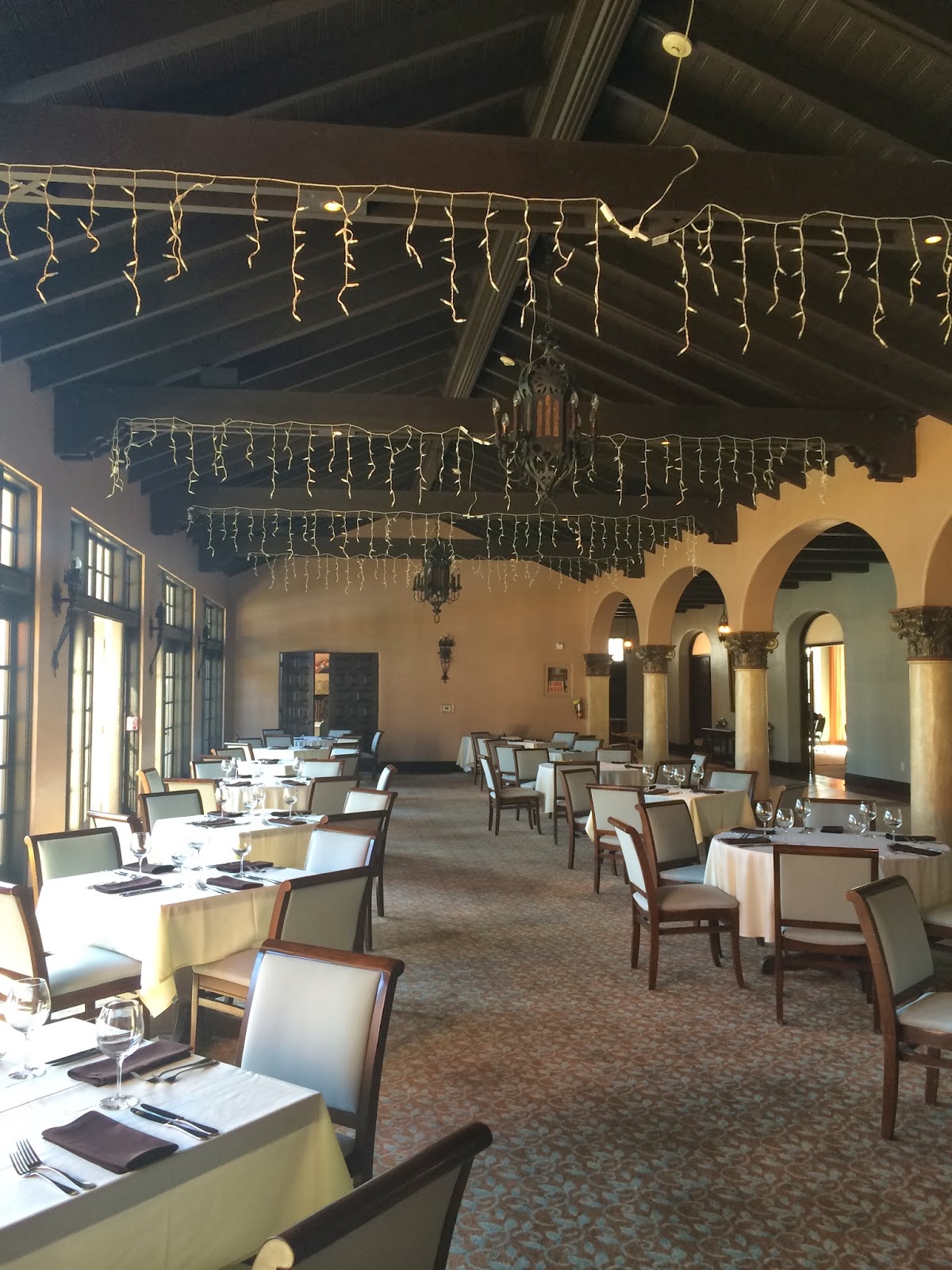 I didn't like the idea that people would have to walk down the hall to a different room to dance; I wanted a space where even the wall flower would be able to sit and relax and chat while watching others dance, so everyone would feel like they were part of the same event.
The ceremony space was also pretty lackluster; it was just a corner of lawn outside the front of the building that overlooked the golf course to one side, and the parking lot to the other. It was so underwhelming, I didn't even take a picture... It felt very much like an afterthought. However, the building itself was really pretty and I could definitely have pictured our theme working within the space. Another mild gripe: there was a LOT of orange happening! I guess I'm pickier about color than I thought... But the awning outside of the reception/dinner space was orange and reflected orange light back into the building, the curatains in the dance room area were orange, and outside all of the umbrellas and trim were orange. One major perk was that they said they could arrange transportation from a hotel to the club, since the road to get to the venue is really windy, and the venue was a bit out of the way. However, the guy who showed us around admitted that the hotel he'd recommend is a bit out of the way because some of the surrounding areas could be a little bit rough. I think lots of parts of Oakland are beautiful, but keep in mind, my dad didn't even want me driving through Oakland when I was younger... I think he may have refused to allow his out of town family to stay within Oakland city limits! That could have been a problem.
Well, that's part one of our East Bay adventure! I had too many pictures to justify trying to cram in the other two stops of the day into one post. I feel like I am complaining a lot about all of the venues, and I am so picky! You're probably shocked to hear that we managed to come to a decision and choose a venue after all of my hemming and hawing... But we did! I'll tell you which one we went with soon, I promise! And I bet you will be surprised by our choice... I think John and I were pretty surprised, too!
Posted by Sarah at 9:52 PM