Hi Guys! Welcome back to part two of my venue hunt. As you may recall, John and I were pretty stuck on the City Club in San Francisco for our dream Art Deco wedding, but as we got more and more educated about weddings, we began to realize that the little costs were going to add up to put this venue outside of our price range. We looked aroud the North Bay some, but found that venues near us didn't tend to be the style we had in mind and were, in general, very expensive. With that in mind, we decided to look around the South Bay some. I went to high school in San Jose and grew up near the East Bay/ South Bay border, so this area has meaning to me, and some of my close friends still live in the area. We drove down one day and went to the Bay Club, a health club that also hosts weddings in its facilities, and then drove to downtown San Jose and toured a bunch of lovely, historic hotels in that area, hoping that one would have a great ballroom with a bit of an Art Deco feel.

By this point in time, we had already accepted that nothing was going to look as classically Art Deco as the SF City Club, so our focus had shifted on finding a pretty space that would lend itself to that type of decor, typography, etc... and would work for what we had in mind. San Jose would be a great option since the San Francisco and San Jose airports are nearby, and downtown San Jose would have worked out perfectly because of all of the hotels in the area for our out of town guests! Here's an overview of what we found.

The first stop of the day was the Bay Club in Santa Clara. The informational packet they sent us before the meeting was promising, price-wise, and they venue looked neutral enough. Upon arrival, however, John and I pretty quickly ascertained this was not going to work for our vision. The building looked very late 70's/ early 80's in a clay tile and unfinished wood sort of way. I was reminded of Epcot- always a good association, but not what we were going for! The inside of the building had a little stream with a lot of vegetation around it going down the center, with wooden walkways on either side.
Off to the left was an area that they used for the reception, with a lower level nearer to the stream that was used for the ceremony.
Off to the right were hallways leading to the club; apparently they put up large dividers so that you can't see that area when an event is going on. I could see this venue being great for someone who wanted a kind of tropical, natural wedding while still being indoors, and it would have worked a lot better with our budget, but it just wasn't what we wanted.
Our next stop was the Hotel De Anza. This is an historical hotel in downtown San Jose. The menu sounded really good, and the woman we met there was very nice. 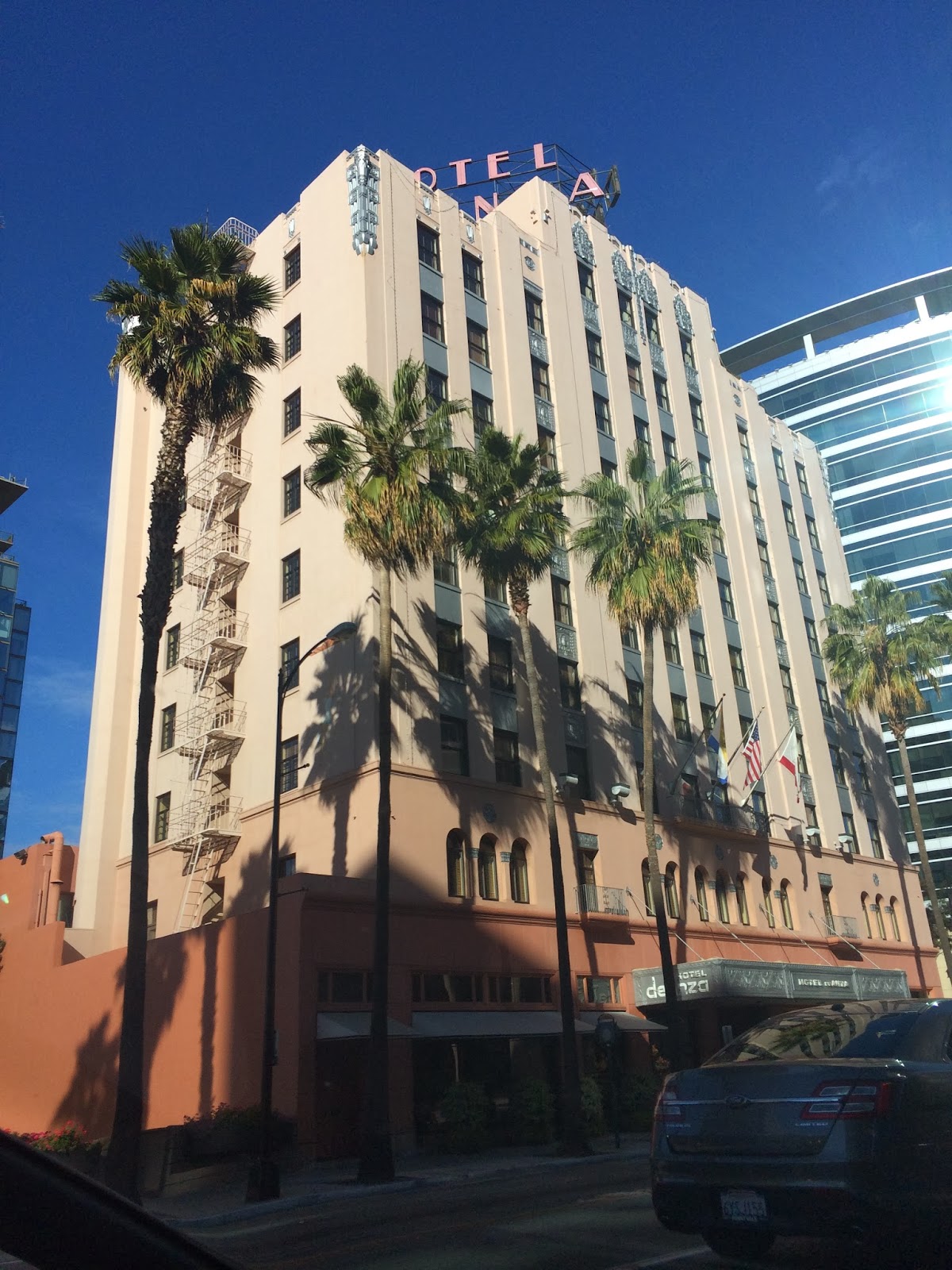 This location looked like it would fit with our budget as well. The ceremony and reception would have taken place on their patio, which they flip during cocktail hour which is held in the hotel lounge. John liked this option, but I wasn't as crazy about it; the patio was fine, but nothing about it really spoke to me personally, and I didn't like the idea of having such a small amount of space. The lounge for cocktail hour would still be open to the public, so between that and using the same area for the ceremony and reception, I just didn't think the event would have a nice flow. The lounge and exterior had a great period feel, but the patio looked a bit Mediterranean.
They did mention that they had live jazz on weekend nights, though, which would have been such a great afterparty; after the receptions, guests could either go up to their rooms or stay and relax in the lounge, which would have been a nice way to extend the event at no cost.
I love me some good live jazz, so I was really into the idea of using the De Anza as an afterparty spot if we decided on a location in San Jose.

After the Hotel De Anza, we wandered downtown San Joseand went into the Hilton, which was much too modern for our event; it was decorated in Chihuly style glass and bold primary colors. 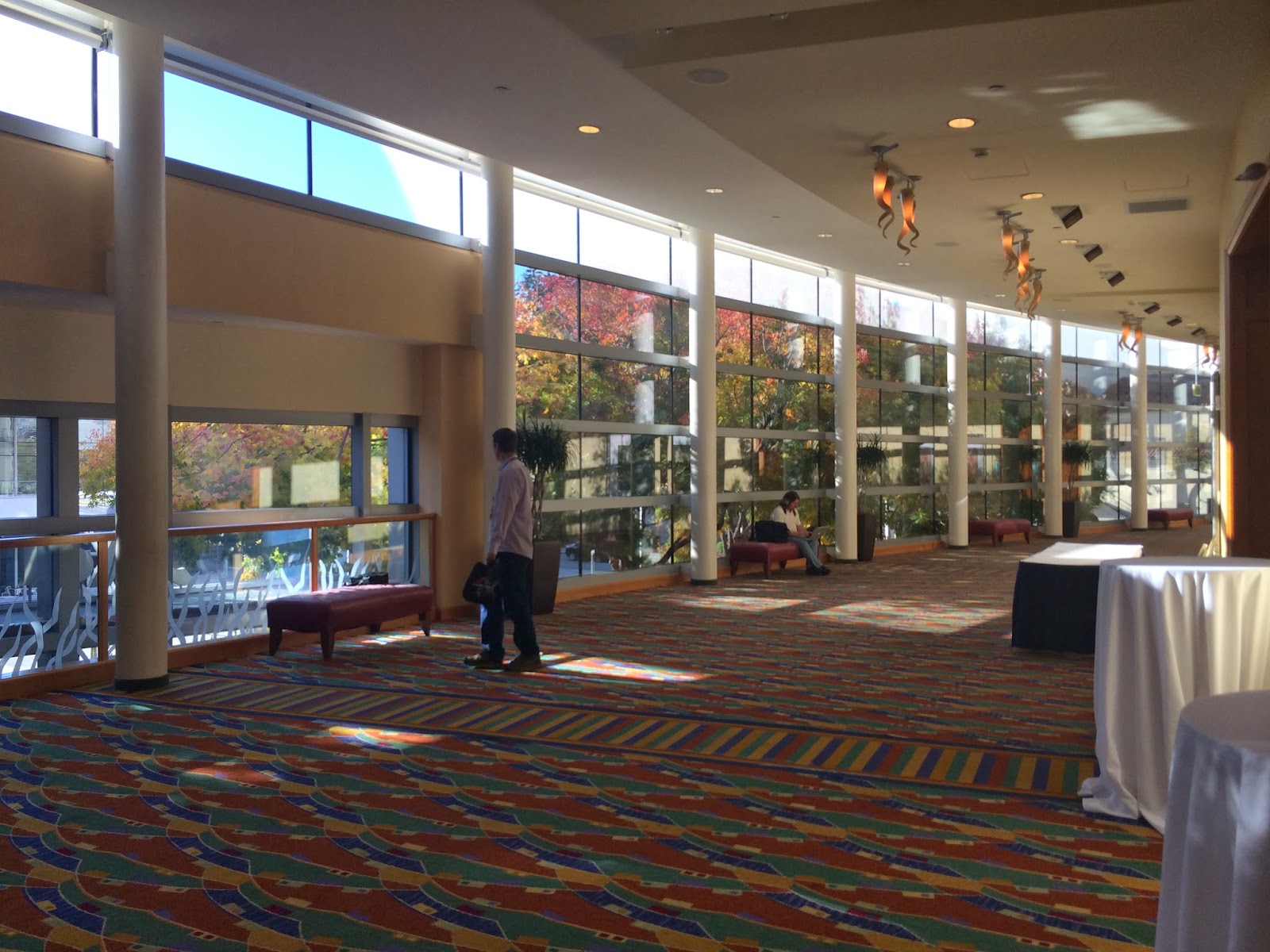 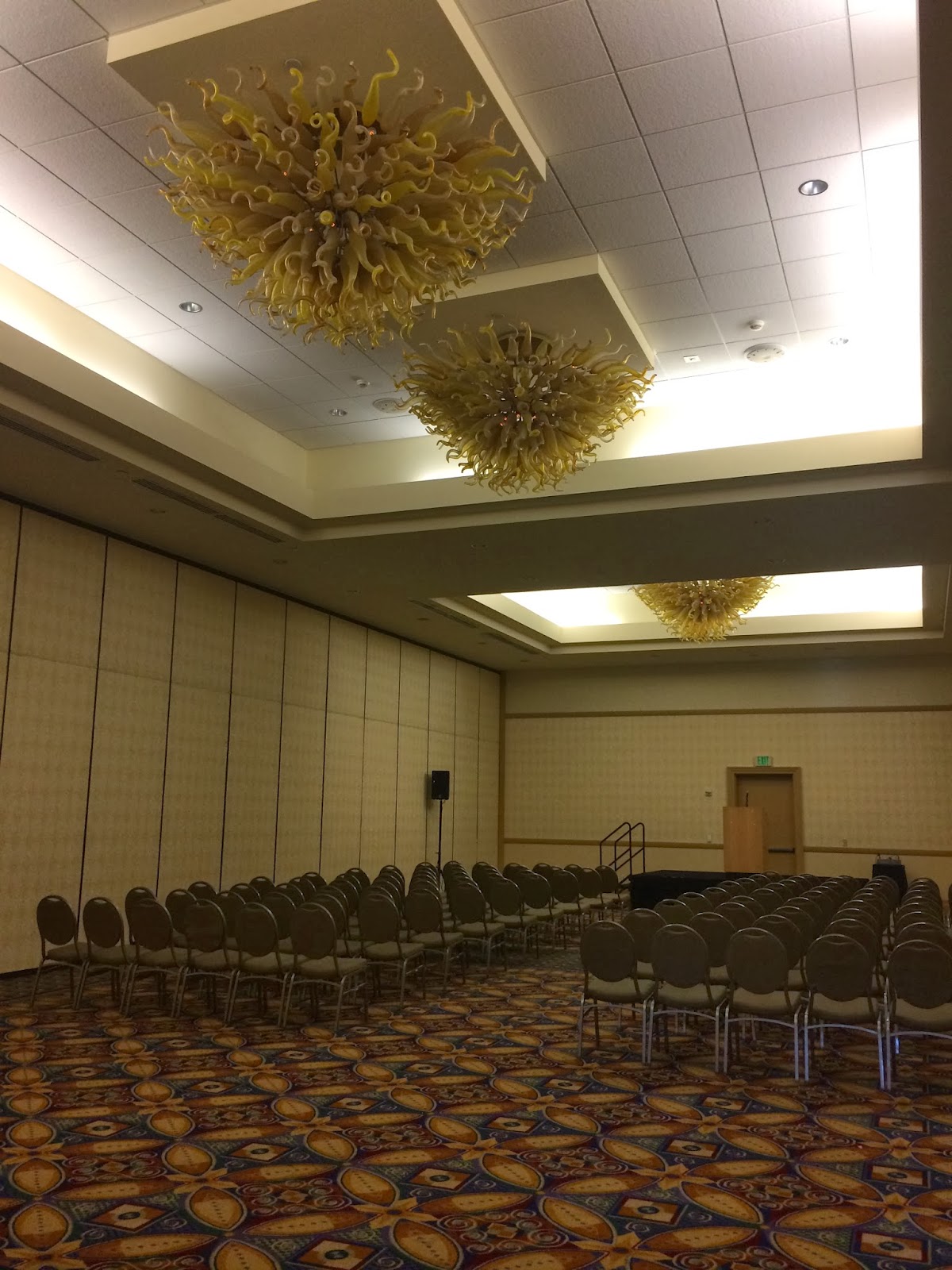 After that, it was time for food. We passed on the provocative pho.

Instead, we went to Johnny Rockets and enjoyed milkshakes! 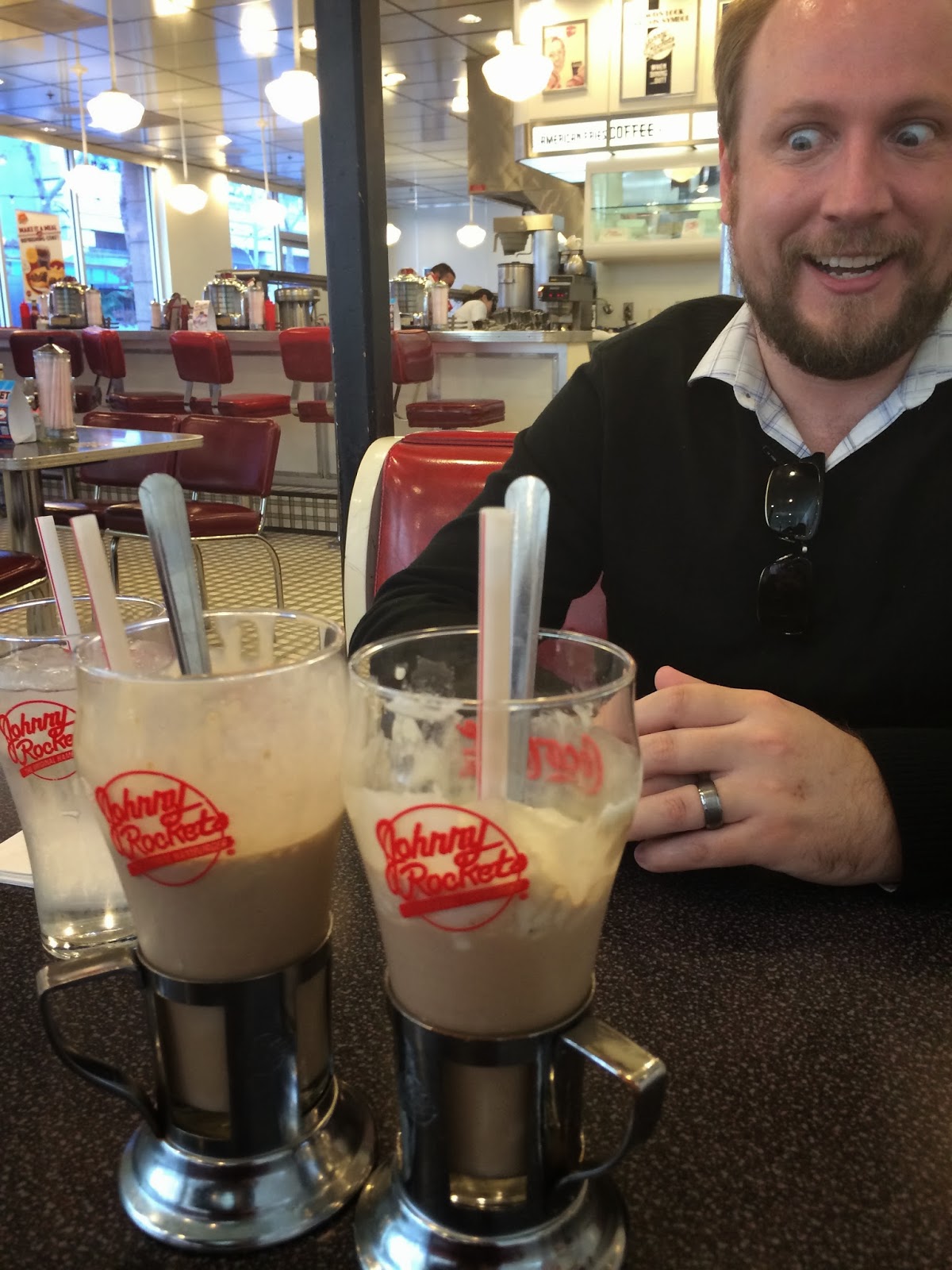 Next, we went into the Fairmont, which was lovely but lacked personality. If we had just been hosting a reception, it may have been a contender, but they wanted to put is in one meeting room for the ceremony, another for cocktail hour, and a third for the reception, and all three looked nearly identical. The man who helped us here was a bit condescending, too. We were walk-ins, so it was really nice of him to accomodate us, but I was really turned off by the way he spoke to me.

From there, we walked over to the Sainte-Claire, another historical hotel.
The Sainte-Claire was beautiful, and the catering was all handled by Il Fornaio, a small Italian restaurant chain. John and I both really liked this venue. The ceremony space, a glass-enclosed atrium, was one of his favorites that we saw in our search.
Cocktail hour would spill out of that space (which has a built-in bar in the back) into a really lovely hallway, and then the reception takes place in the meeting room on the ground floor.
The lobby had painted leather ceilings, and the details of the space were just spectacular.
One drawback was that the hotel was undergoing a transition in owners, as it was being bought out by a larger chain (I want to say Hyatt?). Because it is a national landmark, the look of the hotel could not have been changed drastically, but policies and management may have changed from when we booked to when the wedding occurred. Also, when we ran the numbers, we realized that this was going to be one of our pricier options. Of course!

After that, we drove over to Santana Row in San Jose to see the Hotel Valencia. 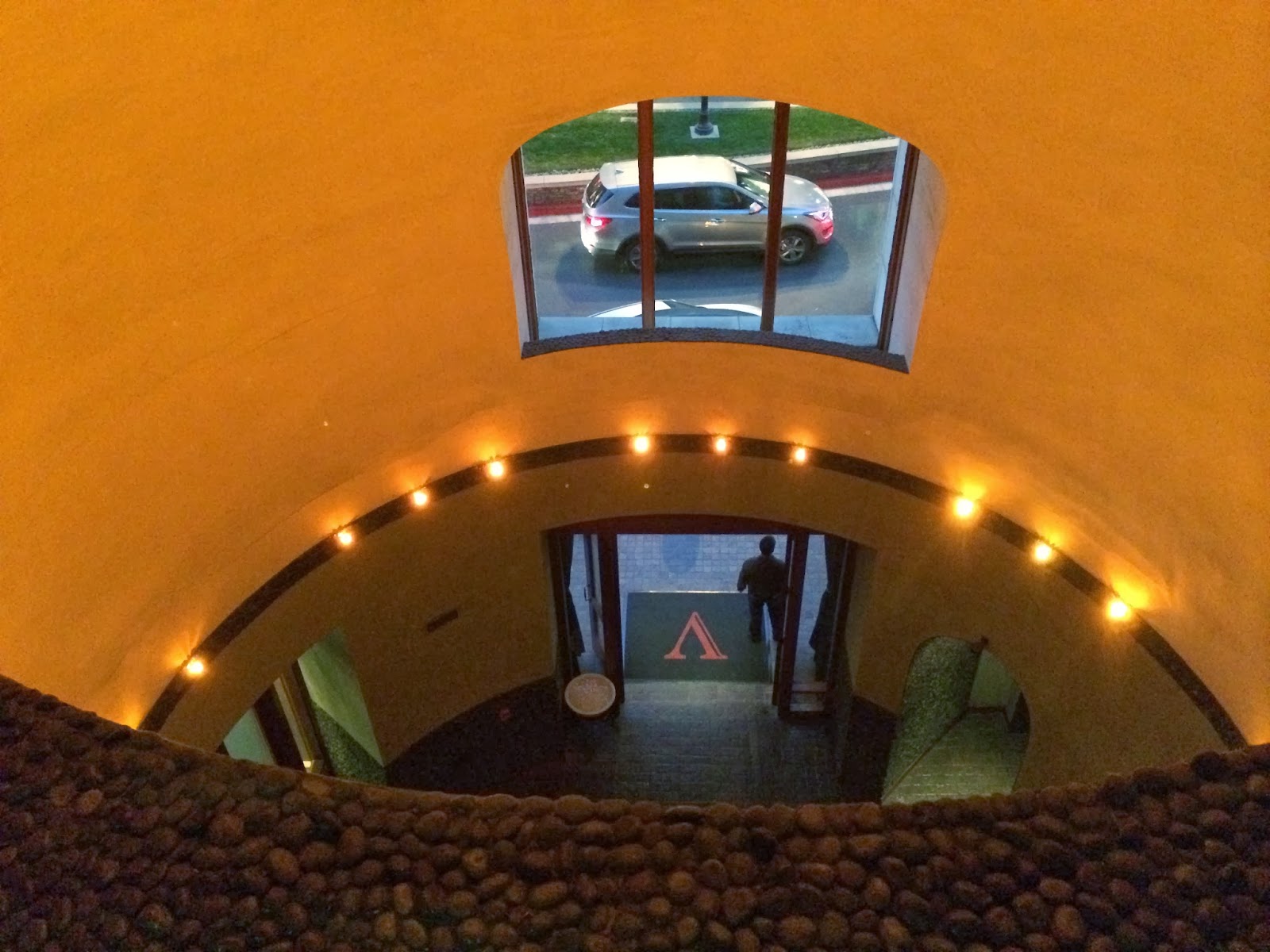 Their pricing and menus both looked great, so we decided to check it out. It was very modern and sleek with an Asian aesthetic. It kind of felt like a club inside... It was incredibly dark. Awkwardly so. It was too dark for me to take any interior pictures.
And then we found a bar that looked like it had been airlifted out of Vegas, so... That wasn't really helping the Hotel Valencia's case. It's a neat place, but would absolutely not work for what we have in mind. However, their buffets sounded amazing! I want to go to somebody else's wedding there. And eat a lot.

It was a long day, but we got a lot of great information and saw some really inspiring spaces! I think this was the first day where we were able to let go of the SF City Club, and we also got some neat ideas about how a less specific venue could work with our vision. I'll show you guys the rest of the places we toured soon!
Posted by Sarah at 11:16 PM