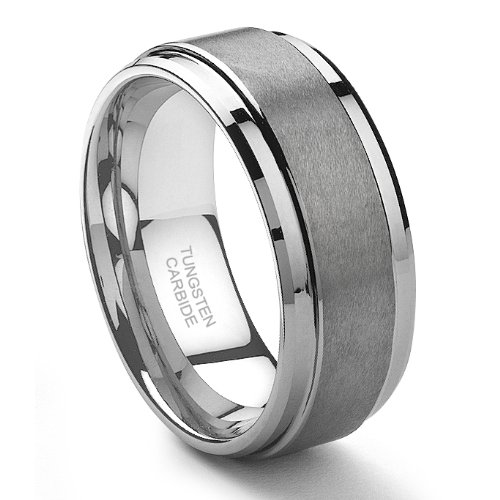 When we began talking about getting engaged, I asked John if he wanted an engagement ring and he said yes, so as we were having my rings sized, we picked one out for him, too. He enjoys wearing it; we bought an inexpensive ring from Amazon (comparable to some $200 rings we saw in local stores... Seriously guys, check out Amazon) with the understanding that he could pick out another one later if he wants. He was nervous about getting used to wearing a ring, and I think he liked that by the time we get married it will be second nature to him.

We've gotten some criticism for his choice to wear an engagement ring. I'm learning that it is impossible for people to keep their opinions to themselves when it comes to engagements, weddings, and marriage, so being questioned on this decision should come as no surprise. It's non-traditional in our part of the world, and John and I both understand that, but I love the decision. It makes me feel less like I am being purchased with a ring, less like my ring is a symbol of becoming someone else's property. In a less extreme way, it makes it feel more "fair"; we are both promised to one another, and we both wear an outward symbol of that commitment.

I think my favorite part about John wearing a ring is that it is something that brings us together. We often talk about how exciting it has been to wear our rings, and how much we've enjoyed showing them to curious friends and family. I love that this is an experience we've been able to share.

What do you guys think about engagement rings for men? Do you like the idea?